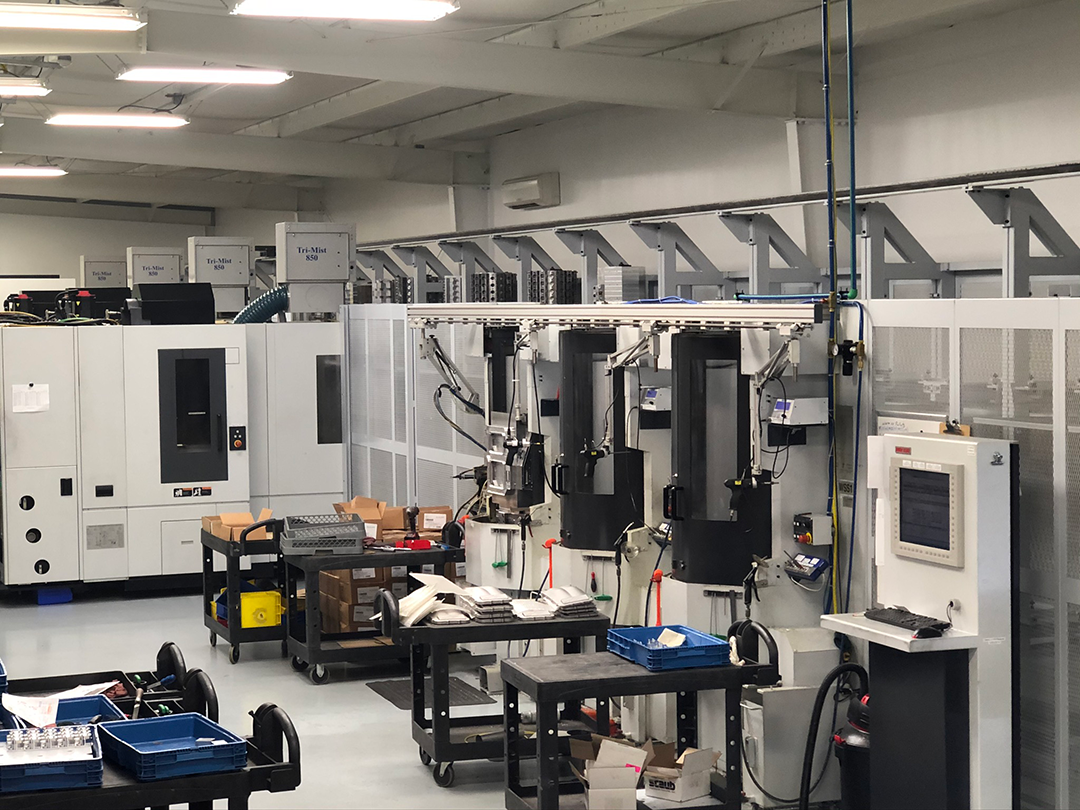 In the early 1980s, some manufacturers started to toy with the idea of developing fully autonomous factories that used robots, conveyor systems, laser-guided material handling systems, sensors, and vision solutions to eliminate the need for factory workers. Although this endeavor was successful for a very small number of companies, the majority found it impossible. Manufacturers discovered that the perfect storm of the right mix of parts, machine features, tooling, work holding, and dozens more “right things” were needed for fully unattended operations.

About a decade ago, buzzwords such as “The Smart Factory,” “Lights-Out Manufacturing,” “Industry 4.0”, and the “Fourth Industrial Revolution” started to gain popularity. These terms have slightly different meanings and requirements, but for the most part, they boil down to one thing: AUTOMATION. At least some manufacturing processes must be automated to increase output while maintaining labor and overhead costs. Today, many machine shops are starting to embrace this ideology.

One such company is ours – Staub Precision Manufacturing in Hamburg, New York. We are a high-volume, high-precision machine shop that manufactures various parts/assemblies for the commercial, medical, and aerospace/defense industries, with yearly parts quantities ranging from several hundred to tens of thousands.

Staub was started in 1975, and from day one, we have pretty much run the traditional 40-hour work week with a single shift, 8-hour work day, and the typical 5-day work week. Overtime is rare because our company’s culture has always been such that management would rather see their employees go to their child’s softball game or spend their weekend on the nearest lake with family and friends than spend their evenings & weekends in the shop.

But that doesn’t mean Staub has settled for the production limitations of a 40-hour work week. Since the early 80s, we have practiced lights-out manufacturing at some level. We started with adding bar feeders to our lathes that enabled them to run a couple of extra hours a night after everyone went home.

The productivity increase we saw due to these two to three unmanned hours each weeknight prompted us to investigate more automation methods. We eventually purchased a Linear Pallet Pool (LPP) system. This LPP connected multiple 4-axis horizontal machining centers to a pallet storage area with a capacity of 50 different pallets. A pedestal-type fixture column is mounted on each pallet and typically has between 2 and 8 sides to it. Each side holds between one and more than a hundred parts, depending on their size and complexity.

The pallets are set up only once—with the tools for each job stored in high-capacity tool magazines—and can run multiple parts 24 hours a day. Over the years, we purchased and customized two more LPPs that now house thirteen 4-axis horizontal mills. At an average of only 4 sides per fixture column, this LPP setup could run hundreds of different groups of parts across its 150 available pallets within any of its 13 machining centers. These pallets are loaded and unloaded into the machining centers by an Automated Guided Vehicle (AGV).

Several pallets have been running the same jobs for more than 15 years and have produced hundreds of thousands of parts.

To ensure our machines could run unattended all weekend, we developed an in-house automated coolant supply system utilizing special pumps to mix coolant into the correct mixture. Each of the machines has controls that determine when coolant is needed, and it is automatically delivered through a PVC piping system that runs along the ceiling of the plant. They have also spent years managing chip control. Many processes have been developed to minimize chip size and removal, with several more—including an overhead vacuum system for chip removal, compression, and coolant recovery—on their continuous manufacturing improvement task list that keeps our in-house Automation Team busy.

This same “Lights Out” philosophy continued with the implementation of ten robotic stations. Within these stations, robots can load raw material, unload finished parts, assemble, wash, dry, package and palletize parts, and install off-the-shelf hardware without human intervention. These robots give feedback to the CNC machines so that the machines can shut down if any problems arise during unattended runs.

These advances in automation play a large role in our ability to increase production here at Staub.

Too Much of a Good Thing?

But what happens when you combine high-volume machining requirements with tight-tolerance parts that require a higher rate of inspection and statistical process control (SPC) analysis? Like many of the forerunners in lights-out manufacturing, we quickly discovered that our Quality Control department was a bottleneck to getting finished parts shipped to their customers. Some of the benefits of manufacturing thousands of extra parts at night, on the weekends, and during holiday shutdowns were negated because we didn’t have the bandwidth to our their inspection requirements.

“One problem we ran into was how the increased output of lights-out production could end up causing headaches for Quality Control,” Gatlin Walters, Staub’s Quality Engineer, recalls. “We would come in on Monday morning to multiple bins of parts that needed to be inspected or checked for a single non-conformance that occurred sometime over the weekend. The only way for Quality to keep up with the volume of lights-out manufacturing would also be to develop lights-out inspection.”

Staub uses multiple CMMs (two with vision system capabilities) to meet the final inspection requirements for most of our parts. To keep up with the huge influx of extra parts we were seeing each morning, we developed a fixture plating system that allowed multiple parts to be placed on the beds of their CMMs at one time. A customized measurement program was written for each part. It measured a single part, created an inspection report, indexed to the next part position, and started the process again.

The first fixture plate we developed held 18 parts, each requiring 28 dimensions to be measured, two of which had a total tolerance of less than one-thousandth of an inch.

Each part took over 14 minutes to measure and consumed more than half a day to inspect all 18 pieces individually. Once the fixture plate was loaded, the inspector positioned the measurement probe over the lower-left corner of the plate, pushed a button, and walked away. Four and a half hours later, the 18 parts were completely measured, and individual inspection reports were created. It wasn’t long before this was set up at the end of the shift and running overnight.

Several evolutions and lessons learned later, the newest fixture plate (we now have several) holds 168 aerospace parts requiring 100% inspection. Initially, one part took about 3 minutes to measure manually, but that measurement time has been whittled down to just over a minute each. One full plate takes under 3 hours to run and has enabled us to measure over 800 parts weekly at night for an inspection time savings of over 14 hours per week. The measurement program has been modified so that it can tell the difference between several different part numbers by identifying certain feature sizes and locations, creating directories on the computer with a date, time, and part number naming convention, create inspection reports inside these directories, and identify failed parts and their location on the fixture plate, and place our inspection reports in a separate “FAILED” director for review in the morning.

At Staub, we also recently set up In-Process Inspection Stations that use handheld Bluetooth measurement devices. These Bluetooth devices automatically fill inspection forms developed for input into a database within our ERP system. These handheld measurements are automatically combined with measurements taken on the CMMs. SPC data on critical features and key characteristics are collected and recorded, and control charts for data analysis are only a button click away.

“We used to take manual measurements and write them down on a blank form,” said Mike Rozycki, Staub’s Turning Department Supervisor. “There was also a lot of running back and forth between the Optical Comparator, the Vision systems, and our workbenches to get everything done. Now it’s all in one place and practically automated. The biggest benefit is verifying that parts have been inspected before moving to the next cell. We are still in the process of developing different tools for reporting, but overall, it’s a huge timesaver.”

Even though we had taken giant steps toward our objective of matching our lights-out inspection capabilities to our lights-out manufacturing output, we continued to improve processes, including with our sampling inspection. Previously, parts were checked after dozens or even hundreds of parts were made. A part failure normally meant that all uninspected parts made from that point on would also fail, allowing for inefficiencies with both materials and time.

To address this problem, hi-resolution 2D and 3D Laser Profiler systems were implemented and used as In-line Vision Inspection and Rejection systems. They are mounted in several of our robotic cells and measure critical 2D or 3D features and tolerances on the parts as soon as they are made. One such cell uses a robot to remove the finished part from a lathe, wash it to remove any coolant and debris, hold it under forced air to dry it completely, and place it within the apertures of the Laser Profiler for dimensional analysis. Once measured, the robot retrieves the part and places it in a bin. The Laser Profiler sends a signal back to the lathe and stops the machine if two parts in a row measure out of spec.

Our continuous manufacturing improvement task list has several more projects to automate our inspection process. Some include:

Current In-line inspection can only stop the machines once two bad parts are discovered in a row. Pairing the in-line laser profilers with machine control would allow for the adjustment of tool offsets before bad parts are made. As a dimension approaches its outer limits, the machine would be sent feedback that would make any necessary adjustments.

The fixture plate system for the CMMs can’t currently run all night. The longest-running fixture plate accounts for less than 5 hours of unattended time and then must be reloaded or swapped out with another plate. There are plans in development for the robotic identification, load, and unload of the fixture plates. This will allow for the usage of all off-shift hours for these machines.

One robotic cell installs off-the-shelf hardware into some of its aerospace parts without human intervention. Several more of these cells are slated to be built to accommodate more sizes and variations of this type of hardware.

Given our advancements over the past several decades at Staub, starting when both the lights-out philosophy and technology were in their infancy, it would be very interesting to come back in five or ten years to see what additional manufacturing improvements have been implemented.

Then hit the lights on the way out.

*Thank you to Stephen Sullivan, Staub Quality Manager, for his contributions to this piece